BPI 1MR Vortex Pre-Workout Review: Rev It Up, Get Boosted And Hit Your Target!

Everyone has that off day when there’s just no zeal to hit the gym. Yes, even the ripped and gigantic professional bodybuilders.

There’s a rather popular serum to rev your mind and muscles up and get you back on track to chase your body goals.

That serum is called:

Pre-workout. And with the right one, you’ll be hitting the gym with focus, more reps, and pump throughout your program.

As you already know, there’s a sea of pre-workout products on the market. To help you test waters, we’ll be taking a swim with the BPI Sports 1MR Vortex Pre-workout in this review.

You’ll get to know if it’s right for you or worth the money.

BPI Sports is a sports nutrition company based out of Hollywood, Florida, that has been around for over a decade.

It was established by two financially and emotionally broken friends (Chris Mackenzie and James Grage) who wanted to “make better products for better results.”

Down the line, the company sealed several partnership deals and signed a ton of weightlifting icons. They started off by signing 4x Mr. Olympia champion Jay Cutler, and today, have a dozen of other renowned IFBB Pro athletes on their roster.

BPI Sports has catapulted to the top and is now recognized as one of the fastest-growing sports nutrition company on the globe.

BPI Sports now offers a wide range of fitness products from whey protein, fat burners, amino, to pre-workouts. The 1MR labeled as “One More Rep” is their breakout and flagship product. Keep in mind that it’s a different product from 1MR Vortex.

They also have several other pre-workouts, with Pump-HD being the latest release in that category.

In this review, we’ll be taking the Fruit Punch flavor of their 1MR Vortex pre-workout for a spin.

BPI Sports punts the 1.M.R Vortex as an extreme pre-workout formula that increases endurance, focus, and overall performance in the gym.

If you were wondering, the 1MR Vortex is more of a stimulant-based pre-workout. However, One More Rep, BPI Sports breakout pre-workout adds muscle pump into the mix.

So, if you want to get some muscle pumps during your training, you might want to look elsewhere. 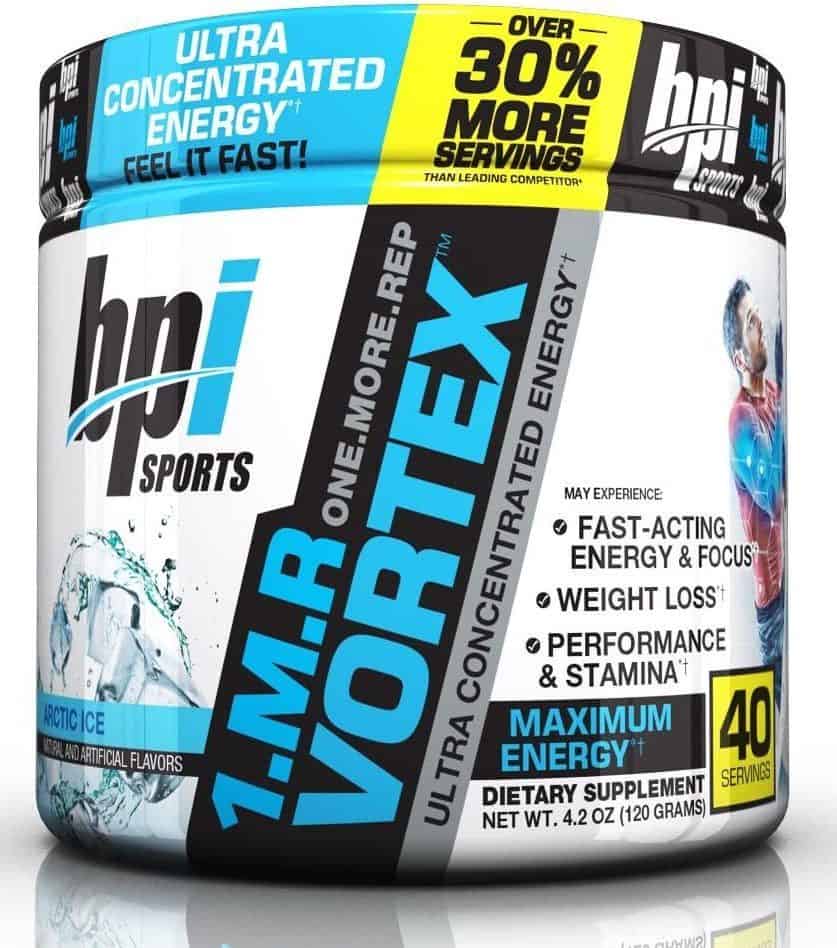 But if you want a workout to give you that extra boost to hit the gym or intensify your workouts, you’re on the right lane.

The only thing is, it is a proprietary blend, so you can’t determine how much caffeine you’ll be ingesting if you’re caffeine intolerant. However, if you’re all about seeing effects, then you can rest assured it works.

All in all, it’s an extremely affordable stimulant-based pre-workout.

The majority of the ingredients fall into the Full Speed Vortex Blend, which contains about 90 percent of the main ingredients.

Although it’s a proprietary blend, the caffeine content can be estimated to about 200mg. That’s about two cups of coffee at your local coffee shop. The rest of the ingredients are mostly plant-based stimulants, Yohimbe. 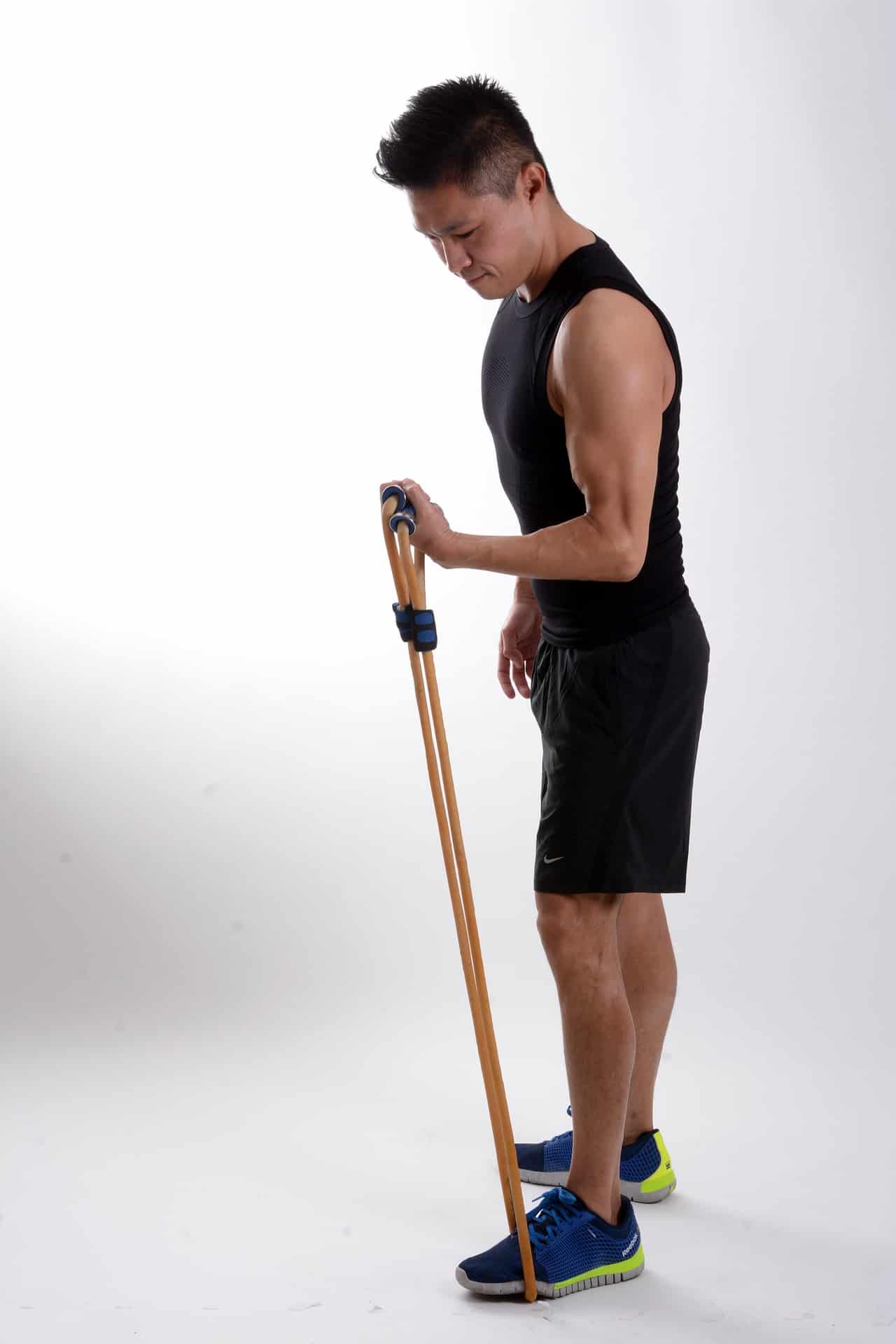 The standalone ingredient, Niacin, is the only one with a quantifiable dose of 20mg. And that’s a tad bit more than the needed daily intake.

As I’ve come to expect of an inexpensive pre-workout, the flavoring, coloring, and anti-caking agents contain both natural and artificial substances.

A scoop of 1MR Vortex measures at only 3 grams, which makes it a microdose pre-workout. And it’s recommended you test your tolerance with one before moving to two scoops.

On a final note, since it contains mostly stimulants, it can be used as a base mixer if you like to personalize your pre-workout with BCAA, protein, and so on. It mixes fine.

Compared to many products, most of the ingredients in the 1MR Vortex are obscure to the pre-workout industry.

Niacin is a B-vitamin, vitamin B3, to be precise. It’s better known for reducing LDL cholesterol, aka “Bad Fat,” and increasing HDL cholesterol, “Good Fat,” in the body.

So it seems it was included in 1MR Vortex for fat loss. Although, some folks say it’s a secret weapon for “extra pump” because it causes the blood vessels to dilate.

The result of this can cause the face to flush or tingle, which is similar to beta-alanine intake. For some reason, it feels like BPI Sports put Niacin in their pre-workout to give users the feeling that it’s “working.”

Glycerol is an emulsifier that’s also used as an anti-caking agent. For pre-workouts, it helps retain water in the body, boosting hydration, and enhancing your performance in the process.

In particular, studies show that glycerol supplement can increase aerobic and anaerobic performance. Helps with muscle pump. Boosts hydration or water retention in the body for increased energy and endurance.

This is a West African plant that’s supposedly used to ease malaria, snake bites, diarrhea, and for its anti-inflammatory effects.

There is only substantial evidence of its anti-diarrheal effects, but none to show that it’d add any benefit to performance in the gym.

But a better explanation for its use in the Vortex is that it boosts the release of dopamine – “the Feel Good Chemical". It may boost mental focus and motivation to hit the gym.

Excess of white leadwort is known to cause abortion, but that wouldn’t be an issue with the BPI Sports Vortex.

Securinega is a herb that contains a chemical that stimulates the central nervous system. This is combined with other stimulants to make a potent stimulant-based pre-workout.

Saving the best part for the last, the remaining ingredients are caffeine and yohimbine.

These ingredients are like the engine of the 1MR Vortex Pre-workout.

Of course, you already know that caffeine gets you up and ready to hit the gym with insane energy levels. But what’s even better is the synergy between caffeine and Yohimbe, which is a wholesome combo.

As we’ve noted earlier, we tried out the fruit punch flavor, and it was delicious. The tropical fruit blend had more of a cherry taste.

But it was more like cherry candy than the tropical fruit itself, which isn’t a surprise.

It mixes pretty well, even without a blender bottle. If you want to use this pre-workout as a base to mix other supplements, you wouldn’t have any issues.

The most important thing is that you should follow all the guidelines directed by the manufacturer.

BPI Sports makes it clear not to use the pre-workout 4 hours before bedtime or on your off days. The caffeine dosage can affect your sleep, cause jitteriness, nausea, or headaches.

Also, don’t use the pre-workout on a full stomach.

As a result of the Niacin, you may feel a flush on your face or tingly feeling. Just like Beta-Alanine, it causes no harm.

But then before concluding this review, let's have a quick look at this video to get some tips:

Oh by the way, have you checked out the best pre workout on the market that tells you about your specific needs? I actually took the trouble of putting each according to your specific needs. Please go check it out after this review.

Is The 1MR Vortex Worth The Price?

Definitely. A tub of 50 servings costs only about $18, which is equivalent to 34 cents per serving.

That’s an astonishingly cheap rate considering the fact it works. However, if you’re a stim junkie, you may see better results with two scoops. Even at that, it costs only 68 cents per serving.

If you like stimulants in the 1MR Vortex but prefer to know the amount of what you’re ingesting, Pre Jym is a better alternative.

Pre Jym has a transparent list of science-backed ingredients, which includes a potent 300mg dose of caffeine.

That’s equivalent to 3 cups of coffee and would be a serving would be more than enough for most stim-junkies. However, it costs higher. It works up to about 1.60 cents per serving for 30 scoops.

It’s well worth the price since it also contains a potent dose of creatine, beta-alanine, citrulline malate, and betaine.

If you want to learn more, we did an in-depth review of the Pre Jym Pre-workout in another article.

If you want a high-quality stimulant-based pre-workout that has no creatine, Legion Pulse is the go-to.

It contains a whopping 350mg of caffeine with a good amount of L-Theanine to prevent post workout crash.

Legion Pulse is one of the most sought after pre-workouts for good reasons.

It contains a transparent list of all-natural ingredients, flavoring, and sweeteners. Plus, it has almost a dozen flavors you can choose from, although some may have a bitter after taste due to natural flavoring.

The only thing is, it’s quite expensive. At one scoop per serving of 20, it costs $2 per serving. But it seems like a fair price to pay for a product of its quality.

And just before we jump in into the Pros & Cons of 1MR Vortex, let me also say something about b nox androrush review. All I'm saying is that if you're having a problem with tolerance build-up to stimulants, I believe it's about time you try it out.

But then if you are actually looking for a caffeine kick that's as strong as 2 cups of coffee, mp assault pre workout review is your go-to place right now.

Should You Get 1MR Vortex?

I’d be fast to judge a pre-workout that contains a proprietary blend...

But not the 1MR Vortex.

For one, it’s very cheap and actually does what it’s supposed to do.

Plus, its Full Speed Matrix proprietary blend contains the perfect mix of caffeine and Yohimbe for stim-junkies. And a couple of plant extracts that boost focus and endurance.

Although there isn’t much scientific backing for the plant extracts, the BPI Sports 1MR Vortex gives you the boost you need to go hard in the gym.

I don’t know about y’all, but if you are looking for an inexpensive stim-based pre-workout, it’s well worth the money. 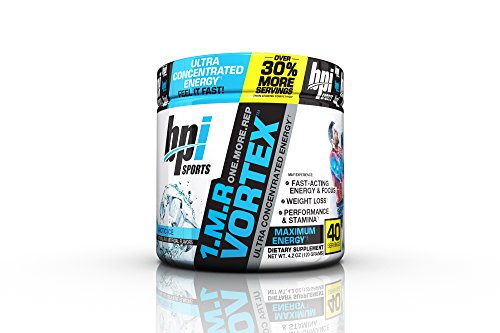 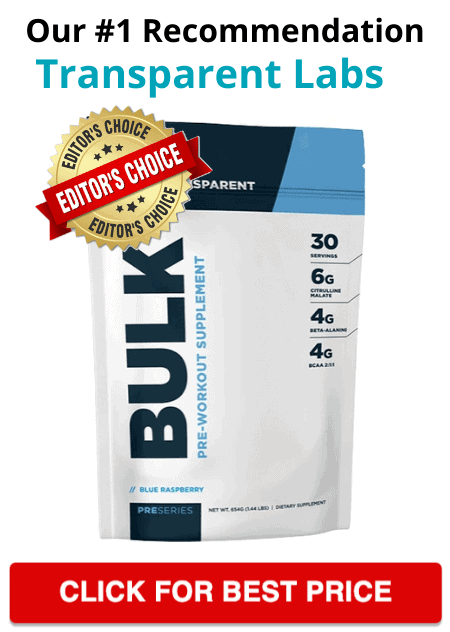