There’s no worse feeling than seeing your gym subscription go to waste because you always feel so lazy after work.

On the other hand, some people make it to the gym but end up putting in little work at the end of the gym session.

Perhaps you don’t fall into any of these categories, and you only need some more energy and pump during your intense strength or cardio training for greater reps.

Can You Trust RedCon1?

RedCon1 is an American fitness corporation, owned by Aaron Singerman, a famed bodybuilder out of Florida.

The company is committed to producing supplements and other products that are effective and doesn’t give off undesirable side effects.

RedCon1 has tons of fitness products available for sale on its online store, including Total War, and even has an apparel line for its hardcore customers.

Even though RedCon1 is known for selling products that work, but it's reputation currently runs a risk of been dragged in the mud. The owner, Aaron Singerman is facing several charges, including using illicit substances, like anabolic steroids in some of his company’s products and also illegal deals.

However, this is not yet confirmed, and the efficacy of their products remain top notch.

Besides, this has been a struggle with a lot of supplement producers.

Total War pre-workout supplement, as stated by Redcon1, is “what every pre-workout wishes it was.”

It is crafted to give you increased focus, energy and skin-splitting pumps at any time of the day.

The whole effect of Total War is expected to last longer than most pre-workouts, and in the producer's words “somebody will need to pull you out of the gym.”

What’s unique about Total War is the variety of its flavors. 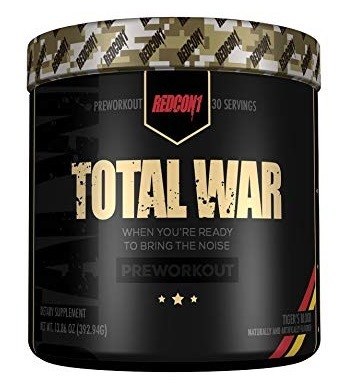 At its first release, it had 16 different flavors, and at the moment, five (5) already sold out.

To be straight with you, Total War is for those who are cool with caffeine intake of 300+mg and not the light at heart.

In case you still want to have a go at its high stimulating effects, it’s best you start with half a serving and work your way towards a full scoop.

Total War pre-workout contains no proprietary blends, and you know the exact ingredient you are ingesting and its dosage. This openness gave me the feeling that Total War can be trusted.

This way, you also know the exact content you are getting from a single serving.

One serving of Total War contains 250g of caffeine anhydrous and 100mg di-caffeine malate which is more potent than a Starbucks Grande or 3.5 cups of coffee, as it is more easily digested.

It’s really a perfect blend for the caffeine junkies, and you’ll be on the safer side with half a serving if you are more sensitive to caffeine.

Then, you can find the usual beta-alanine (3.2g), citrulline malate, agmatine sulphate (1g) and taurine (1g) in standard doses. Don’t get confused yet. I’ll give a detailed explanation later in the article.

It also contains Bioperine (black pepper extract) which is something you don’t always find in other products, especially in a potent dose.

Also, Cocophenol and AMPIblast are some unique ingredients contained in Total War and are even patented.

The “other ingredients” section contains natural and artificial flavors and a few electrolytes.

As said earlier, like any good pre-workout such as Vega Sport, Total War spells out all the ingredients included in the supplement, so you know what benefits you are getting. And their doses will let you know how strong an effect you’ll get from a serving.

Total War contains a heavy dose of caffeine at 350mg per serving, about 3.5 cups of coffee is responsible for the almost immediate increase in focus and energy.

The caffeine dose includes di-caffeine malate which aids effective digestion and prevents a crash from use. 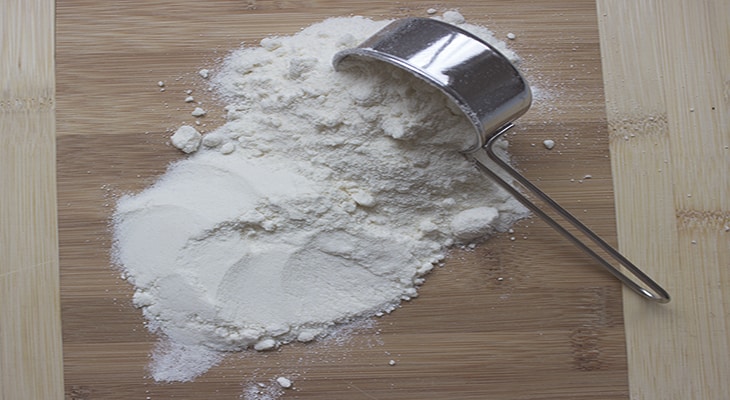 Even though it contains taurine (1g) to reduce jitters from using caffeine, I’ll advise you to use half a scoop or serving if you are sensitive to caffeine.

This is because it contains extra caffeine from 2 aminoisoheptaine, theobromine and alpha-Yohimbe. However, the taurine effectively helps to alleviate the muscle tear and cramps associated with the stimulants.

Also, it contains an essential pre-workout ingredient, citrulline malate (6g) to allow you to hit more reps and ease the muscle soreness that might comes after.

The patented ingredient Cocophonols contains theobromine and camellia sinensis found in cocoa and tea, respectively work together to support energy levels and focus. AMPIblast further soothes the energy gain from caffeine to prevent a crash.

Similarly, naringin is an antioxidant found mostly in grapefruits that helps to stimulate the effects of caffeine. Also, it contains beetroot extract, and agmatine sulfate do a good job of producing nitric oxide to gives muscle pump and endurance. And in a stronger dose than many of its few competitors that use these ingredients.

Overall, the ingredients in Total War are dosed optimally, besides caffeine which is on the high side. This makes it more suitable for stim-junkies and not for you if you have a low tolerance.

What makes it better if you are one is that it also contains ingredients like taurine that allow for better absorption of caffeine, making it even stronger.

Currently, there are 15 flavors of Total War still in stock, with some catchy ones like Tigers Blood and Sour Gummy Bear.

I think the Watermelon flavor tastes good enough, but not the sweetest you’ll find around, but still, several users have complained about many flavors being bitter as well as getting a different flavor than the one they ordered. Now if you're one sweet person, you can get that from the cherry limeade flavor that Pre JYM offers.

It mixes well when diluted in 14oz of water but leaves a chalky feel in the mouth which is easily washed away with another swig of water.

The first side effect you are sure to experience is an itchy or tingly feeling all over your skin. It is caused by beta alanine, and it does your body no harm.

But you should take half a scoop if the tingly feeling from one serving is too intense.

A serving of Total War might also give you the crash (energy drain) due to its high caffeine content. It happens if you have low caffeine tolerance or don’t drink enough water during exercise.

That’s around $1.30 per serving, which is not so bad if you take into account the variety of ingredients and dosage in each serving.

If you are not tolerant enough for its caffeine content or you need a pre-workout that’s more budget-friendly, here’s a duo of alternatives you can try.

Pre Kaged is the pre-workout of choice if you are looking for a natural option. Its ingredients are all-natural, and it contains no artificial flavor or sweeteners.

It’s priced closely to Total War at around $37 but costs more per serving. With a total of 20 servings, one serving costs $1.85.

It also contains less caffeine (274g) and more taurine (2g) to act as a suppressant to the harsh effects of caffeine. Creatine and coconut water powder are ingredients that you won’t find in Total War or lots of other pre-workouts. See our full Pre Kaged review here.

Pro Supps Nitro X Mr. Hyde is not just a cheaper option but also a great fit for the stimulant freaks who are fine with 420mg of caffeine in its purest form.

Not the type you get from a cup of coffee.

It costs about $24 for 30 servings of its Pixie Dust flavor. That’s $0.80 per serving for all of its stimulating effects.

It also contains effective doses of beta-alanine and TeaCrine to ensure you work your ass off in the gym while supplementing with creatine to heal up all that muscle work.

Pros and Cons of Total War

Should You Get It?

RedCon1 is a relatively new brand but are already known for the production of high-quality supplements, like Total War.

Total War is going to give you the added energy and focus for an exercise early in the morning or after work.

But it packs a lot of stimulants if that’s your thing. If not, you can’t have expected less from a pre-workout called “Total War.”

That said, you can buy one of its many flavors for a reasonable price per serving and enjoy its benefits first hand as you suit up for combat in your next training session...

What Is The Best Pre-Workout For CrossFit?

What Are The Best Creatine-Free Pre Workout Picks to Get Ripped?

99 Amazing Pre-Workout Snacks to Crush Your Next Workout 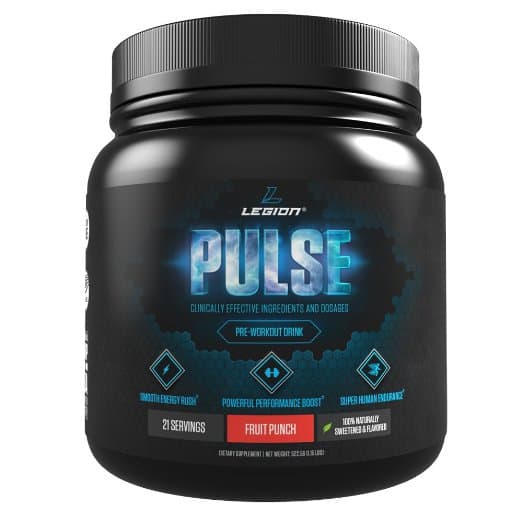